How to deploy Node.js functions on Nimbella

Node.js is highly preferred for developing data intensive real-time web applications. In this blog, let’s learn how to deploy Node.js functions on the Nimbella Serverless platform to build web applications.

Please consider that we are going to build a URL Shortener with Node.js for back-end, React.js for front-end and MongoDB as Database.

We are going to follow the below steps to build our app and make it live. 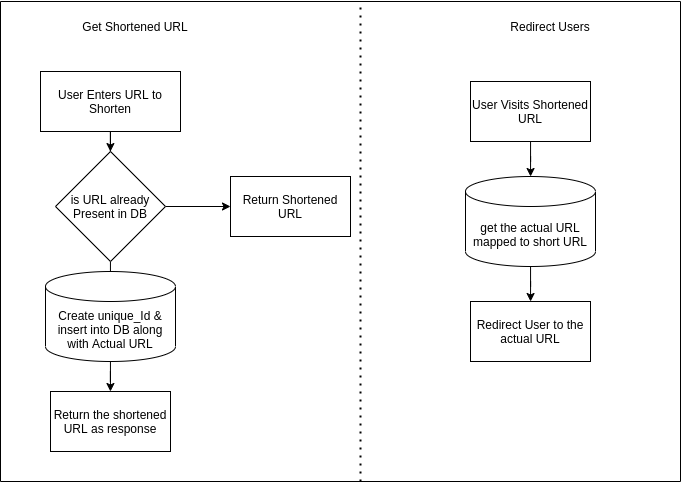 Create a directory for the app and navigate to the directory. And then, create an index.js file.

Run the below command to initialize the project and provide the entry point as index.js.

We need to install NPM packages Mongoose (to interact with MongoDB), and nanoid (to create unique short id).

Let’s create a model for URL data and establish the connection with MongoDB as below in index.js file. We can get the username, password, and cluster URL from environment variables.

In general, when a request is received by Nimbella for your deployed serverless function, Nimbella will forward it to the main function by passing the request attributes as arguments and returns the response of the function to the client as response.

So, let’s create a main function which will deal with the client request. When our function receives a path param, we can conclude that the user is trying to visit the actual URL with a shortened URL. Let’s implement the redirection as below.

When a client request is received to our serverless function without a path param, we can conclude that the user is requesting a short URL with an actual URL. Let’s implement the same as below.

Now the index.js file looks as below after logic implementation. 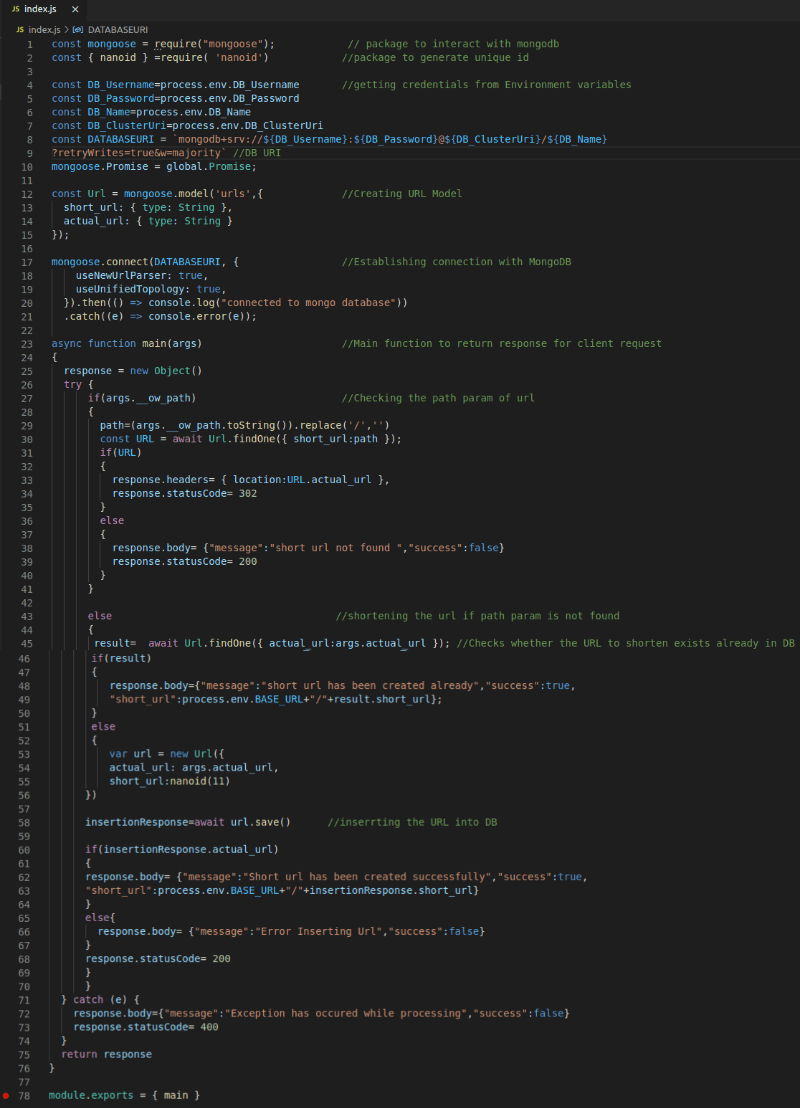 Now our back-end code with node.js is completed and the directory looks as below

Let’s modify and design our front-end in the usual React.js way and consume our API developed with the above steps using the NPM package “Axios’.

Structuring the Directory for Deployment

Likewise, let's copy the code for the front-end (React project) into the directory named “web”.

Once the directory structure is modified as specified, it looks as below: 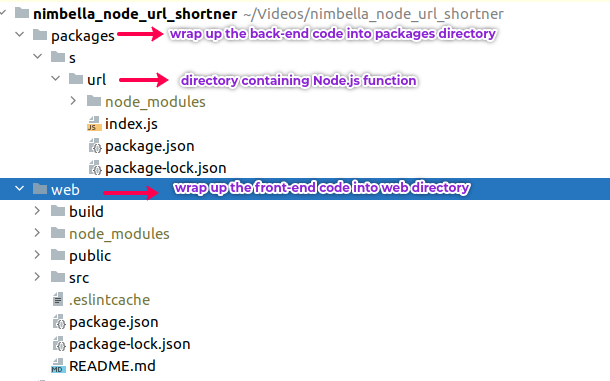 Inside the web folder, let's create two files named ".include" and "build.sh".

.include → React app’s build directory is mentioned inside this file which gets deployed to Nimbella.

build.sh → contains the npm command to build the react app.

In Nimbella, we will be specifying the artifacts to be deployed in a yml configuration file. Let’s create a file named "project.yml" and specify the configuration for deployment as below. 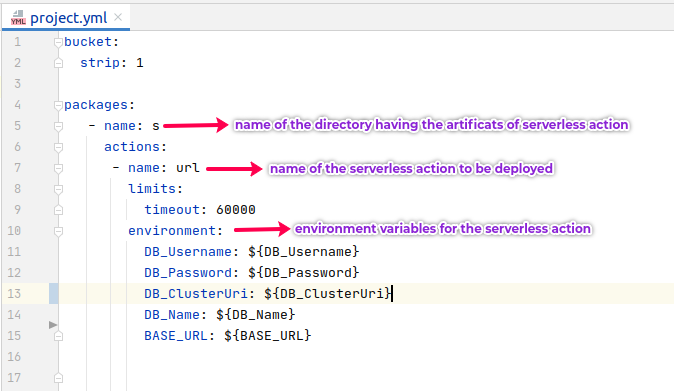 How to Configure Environment variable in Nimbella for deployment

Once the above Steps are done, directory structure looks as below having mentioned files. 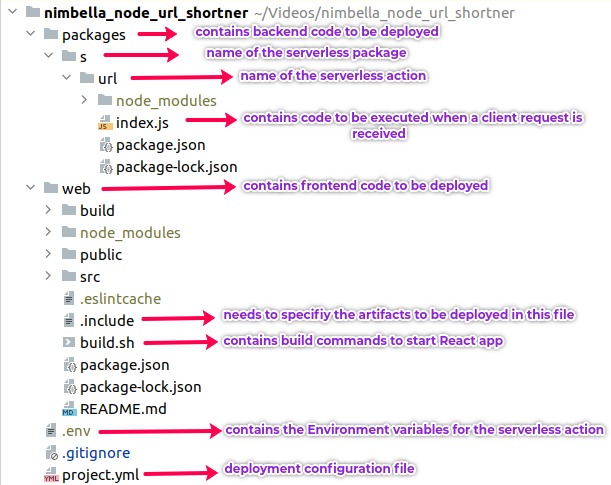 Set up Nimbella for Deployment

Let’s test our API for the Shortener service with Postman 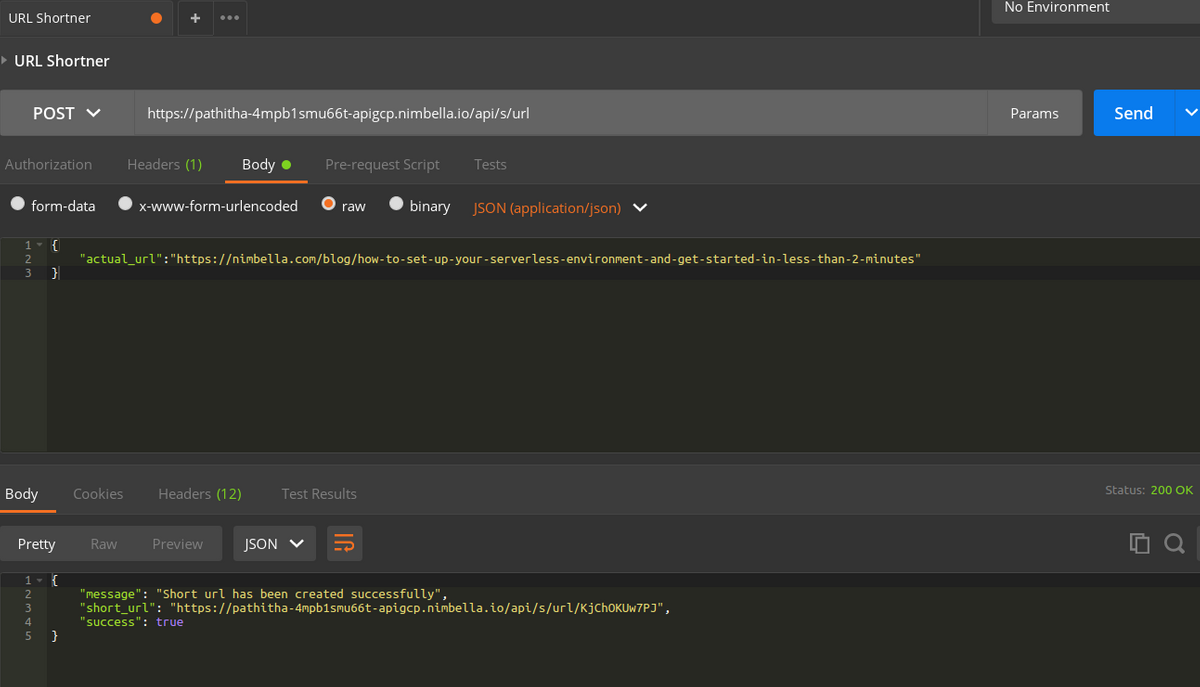 Let’s try our App through UI by visiting the host URL of our API https://pathitha-4mpb1smu66t-apigcp.nimbella.io/ 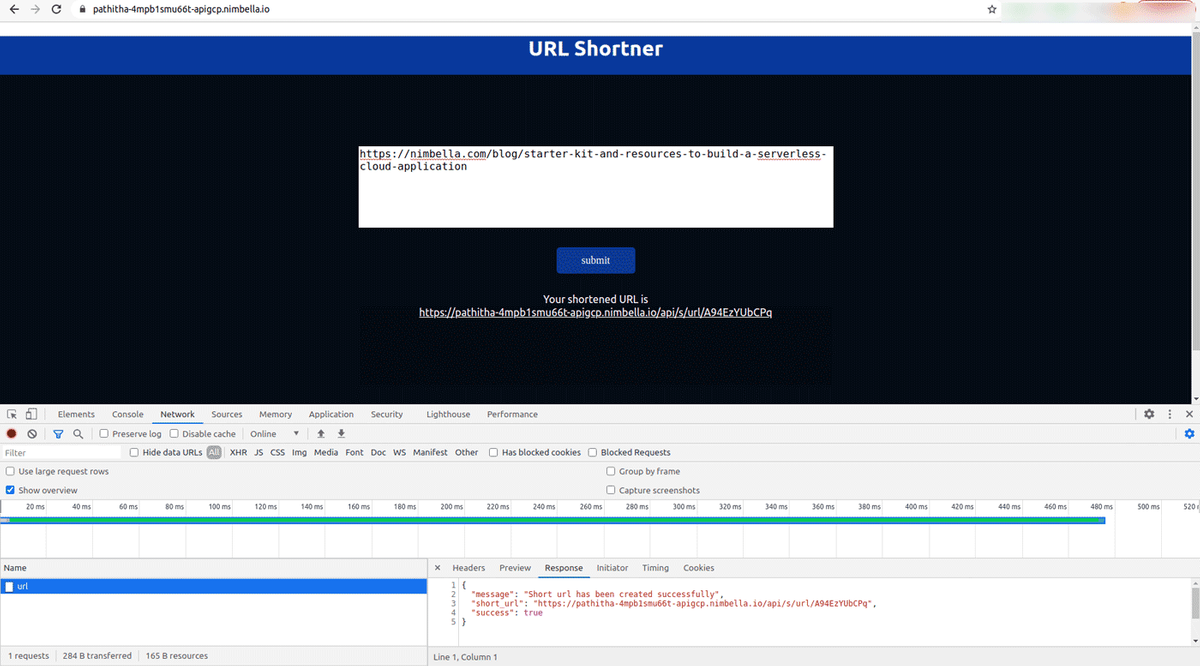