How to Fetch your Digital Ocean Billing Info on Slack?

Have you ever wanted an easy way of displaying your DigitalOcean billing info on Slack? With Nimbella Commander, you can have your current bill and next month’s projected bill displayed using one command to your Slack workspace. This conveniently integrated DigitalOcean billing functionality will allow developers to have cost-visibility without having to navigate complex billing systems, which will benefit the entire organization in the long run.

By following these 7 simple steps, you can add Nimbella Commander to Slack and set it up for running this DigitalOcean billing command. Later on, I’ll show you how to restrict the access for this command, so that it is available only for the relevant people within your Slack workspace. 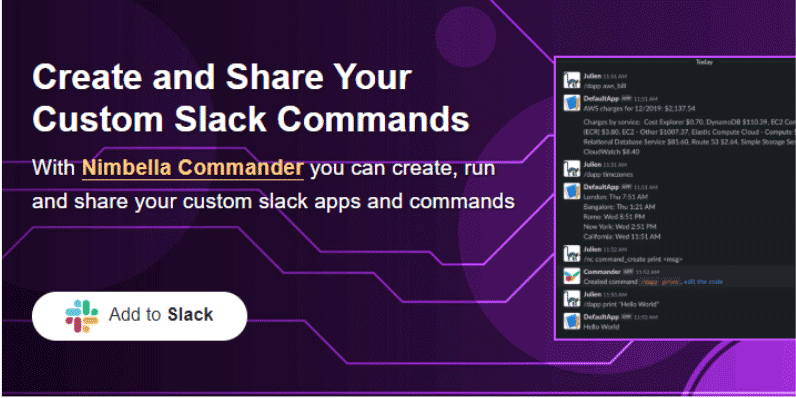 You likely don’t want everyone in your Slack team to run this command. Nimbella Commander offers a neat feature to allow only certain users to run specific commands. For example, you can restrict access to the DigitalOcean billing command to specific users using /nc command_runners dobill + @user1 + @user2, substituting for “user1” and “user2” the Slack names of your teammates that should have access to the DigitalOcean billing details.

It’s worth also mentioning that you have access to an audit trail to see who’s run your commands. This is useful for administrators and team oversight where appropriate. Type /nc command_log dobill

One last thing that’s important to know is that the code for the dobill command you import into Commander is yours to edit. If you type /nc command_code dobill, you will receive a secure link that will allow you to edit the command.

Using Nimbella’s access control you can also limit who can view and edit the code that implements a particular command as well. The built-in Secret Creator means your sensitive data remains outside of Slack and accessible only to the code you run. And with Audit Logs, you have accountability and historical data readily available at your fingertips. These are powerful features of the Commander that don’t exist in Slack otherwise. For more information about Commander, visit our website. We’d also love to hear from you via our community Slack channel or on GitHub.

How to fetch AWS Billing Info on Slack?

How to fetch Datadog Billing on Slack?