Results and Feedback of FaaS Wars - May the FaaS Be with You!

After a wildly successful FaaS Wars Season 1 that witnessed some awesome robots and extensive global participation, we could not resist hosting another Season right after. If you missed your chance in the previous competition, buckle up because we have another challenging season lined up ahead.

Prepare yourself for FaaS Wars 2 right away and participate between April 26 - July 26. This time too, you can expect a lot of cool robots, intense battles, and exciting cash prizes.

Now, let’s give you a brief about FaaS Wars Season 1 and how it panned out so you can prepare for Season 2.

Season 1 of FaaS Wars turned out to be truly global. We had participation from countries across the world where maximum participation came from:

The purpose of the competition was to initiate developers to learn Serverless while also having fun. We saw more than 1,800 FaaS Warriors and more than 500 awesome robots fight to win the title of the #ServerlessJedi Episode 1. There were 3 episodes in this season and with each passing season, the battles keep getting more intense.

Developers actively made use of the tutorial videos, written guides, and blog posts that we shared with them throughout the event to improve their chances of winning and quickly learn more about serverless computing.

By the end of the season, we had 2 winners, one of whom won two episodes.

For those of you who aren’t familiar with FaaS Wars, let us help you with some information.

FaaS Wars was a three-month global robot coding competition organized by Nimbella and members of the Apache OpenWhisk community. It was the first season of this competition and was live from Jan 2021 - March 2021 and had three episodes.

The prize for the competition was a cash prize of up to $1,400, which was divided between the three stages. The winner of the first episode was awarded $200, the second episode winner won $400 and the winner of the third round received $800 in cash prizes.

What was FaaS Wars about?

When a battle was fought, the winner of one round progressed to battle with the winner of another battle and the same continued until the final battle.

Who were the winners?

The final battle or the season finale was won by Michele Curci from Italy, who was also the winner of our episode 1. Michele was awarded $800 for the season finale and $200 for his victory in episode 1. The name of the robot that Michele used to fight the battles was Cortex2. Michele even supported other players by writing an elaborate blog on how he coded his robot that helped him win. 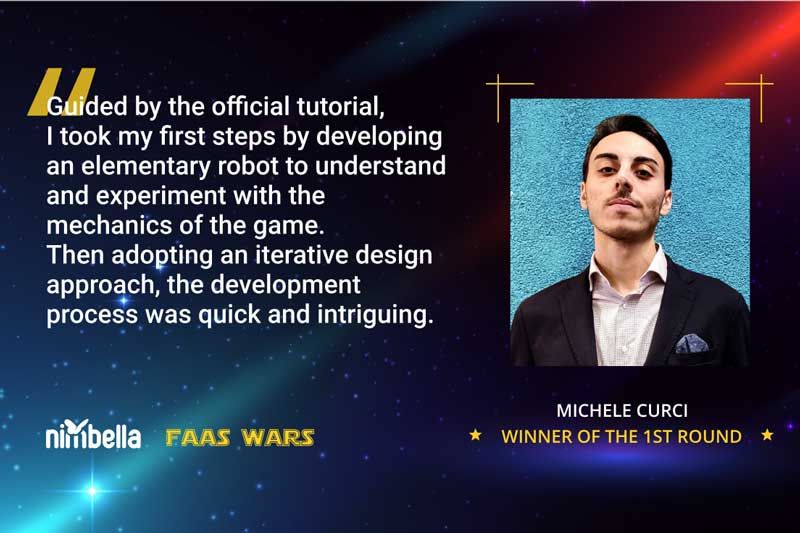 Our second winner for episode 2 was Tyler Zerr from the United States who fought the battles with his robot named TooncesV4. We admire the spirit and enthusiasm with which Tyler participated in the competition. 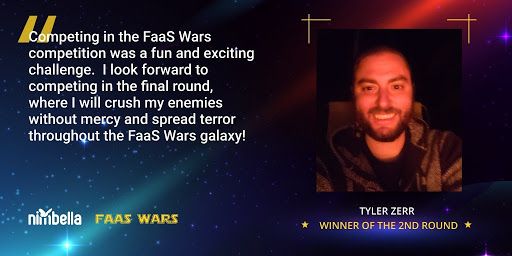 If you missed this season, we ask you not to be disheartened as we will soon be launching FaaS Wars Season 2, which will be more challenging and even more fun.

May the FaaS be with you!

Mihika Pal is an independent marketer working currently with Nimbella and a content writer. She began her career as a hotelier and then moved onto marketing. She is extremely passionate about writing and likes to work independently with brands on their marketing campaigns. You can find her profile on Upwork as one of the Top rated talents in her field.