See the time in different cities on Slack with Nimbella Commander

“A global awakening can not happen. We all live in different time zones.”

Have you ever wanted to see what time it is in a particular city before reaching out to a friend who lives in that city? Maybe you needed to set up a reasonable time to schedule a meeting with coworkers who live in different parts of the world. With Nimbella Commander, you can find out what time it is in any part of the world in one command in your Slack workspace, which will allow you and your team to have an easier time to schedule discussions.

Additionally, I’ll show you how to set the default cities so that you don’t have to specify the city names every time you run the command.

In just 3 simple steps, we will install Commander into Slack, install the times command, and run the command to see the current time in different cities. I’ll also teach you how to edit code to set the default city names, allow other users to run the command and see the command logs or execution history.

Clicking on edit the code link will lead you to a new browser tab.

You can change the very first code line to include your desired cities list, by default it’s 'delhi, rome, new york, los angeles'.

Now only running the /nc times will show current time in those cities.

You likely want other teammates in your Slack team to run this command. Nimbella Commander offers a neat feature to allow other users to run specific commands. For example, you can allow access to the translate command to other users using /nc command_runners times + @user1 + @user2, substituting for “user1” and “user2” the Slack names of your teammates.

It’s worth also mentioning that you have access to an audit trail to see who’s run your commands. This is useful for administrators and team oversight where appropriate. 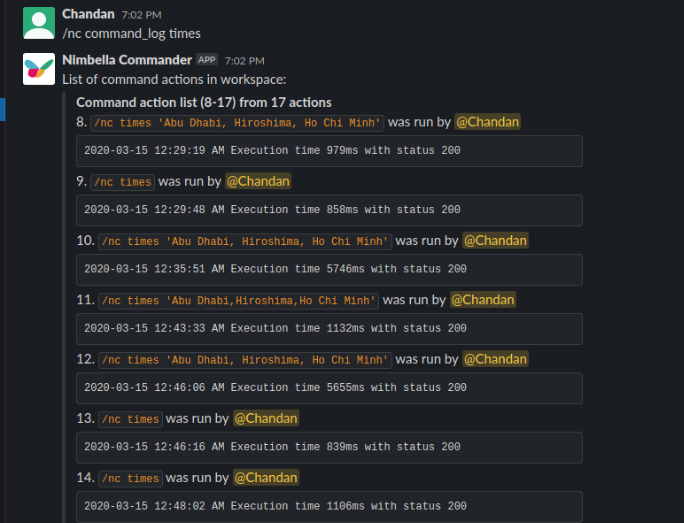 Using Nimbella’s access control you can also limit who can view and edit the code that implements a particular command as well. With Audit Logs, you have accountability and historical data readily available at your fingertips. These are powerful features of the Commander that don’t exist in Slack otherwise. For more information about Commander, visit our website. We’d also love to hear from you via our community Slack channel or on GitHub.