Commander is Nimbella's development platform for Slack. With Commander, you can create and manage custom Slack apps and commands without leaving the Slack environment.

What can I do with it?

You can create Slack slash commands to accomplish just about any web operation you can think of in Slack, such as:

With Commander, you can schedule recurring tasks for your slash commands, such as the following:

Commander also lets you initiate slash commands from webhooks, such as:

Commander has other powerful features that administrators can control by issuing Commander slash commands in Slack:

How does it work?

Here’s a diagram of how Commander works in the Slack environment. 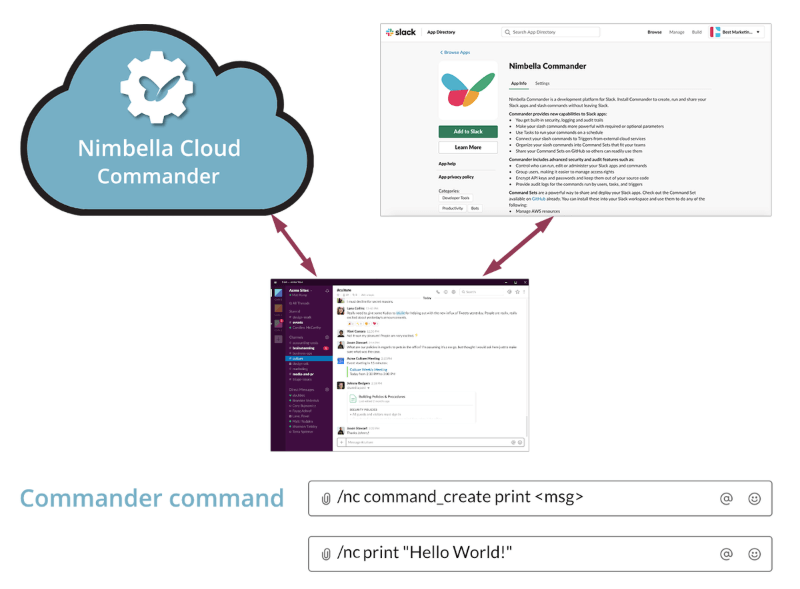 Here’s how all these components fit together:

After you install Commander, you can immediately start using the /nc command to create, install and run Slack slash commands.

Using Commander, you can install and create commands, edit their source code, and perform other administrative tasks, such as:

See the sections below for more information about Commander features that enhance Slack with custom commands.

The above diagram shows an example of a Commander slash command an administrator would use to create a command for your custom app. The command prefix /nc identifies all slash commands that belong to the Commander app, and command_create creates a custom slash command called print with one parameter, <msg>. The output from the command /nc command_create print <msg> is a link to the Nimbella Cloud to edit the source code for this new command.

Users (or other commands like tasks and triggers) who have been granted permission to run the print command would enter a slash command such as /nc print “Hello World!”.

For a tutorial with detailed steps on how to create a custom app and custom commands, see the Quickstart Guide.

Why use it to manage custom Slack commands?

Slack doesn't provide an environment to develop Slack apps or a cloud that runs Slack apps. With Commander, your commands run on the Nimbella Cloud. There's nothing to install, no servers to manage, and no services you need to provision.

Commander includes advanced features such as:

Commands can be created by app developers or even operations specialists.

You can start using Commander for free, with limitations. See the pricing page for information about terms and upgrades.

Here's what you can do with the free version of Commander:

With a Pro upgrade, you can:

Commander is one example of our main platform, Nimbella. See what else Nimbella can do.